The Governor: Dead or Alive

The mid season finale of The Walking Dead kept us on the edge of our seats like never before. The anticipation of who will die next kept lurking in our brain. So much like the deadly virus engulfing the zombies' heads as they ravage through the deserted towns of rural Georgia.


The beheading of the great Herschel brought shock in a magnitude we never expected. I believe Herschel's death might have even had us re think of our relationship with our own father. Equally important, it was also heartbreaking to watch  the death of the little girl who came to adore The Governor. The idea of an innocent young life becoming a victim in this gruesome world of zombies is utterly terrifying to us, and watching these characters endure these horrors is simply engrossing.

A few of us might had even felt pity for The Governor as he himself grew to embrace the little girl like she was his own. But I am sure that a plethora of viewers wished he was the one dead instead of the little girl.

As the show unfolded right in our own eyes, the wish of many became true as Michonne's katana went through The Governor's body like it was meant to be there all along.

Yet, I am not convinced that The Governor is really dead. I know it sounds crazy but I made this assumption based on a few things I saw during the airing of the show.

First of all, Michonne's classic katana strike is 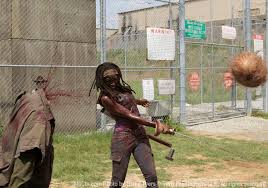 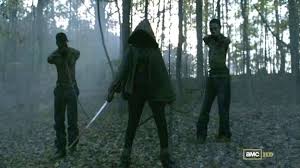 Michonne  pushed the katana through The Governor's body.
A very unlikely move.


We can easily concur that the katana went through his evil heart. Yet, who knows. Strange things had happened in the show plenty of times. Like how Glenn miraculously survived the prison's flu outbreak. Massive amount of blood was pouring out of his nose and mouth but Herschel was able to successfuly intubate him, was given antibiotics, which if it was a virus, abx won't work, leading him to his recovery.

In addition, Lilly, Brian/The Governor's girlfriend proceeded to supposedly shoot The Governor to finish him off..... But did you actually see her shoot him? Any evidence of his body?

Back in March 2013, i wrote an article where I suggested that The Walking Dead is merely a dream going on inside Rick's head while in a coma. The show is a manifestations of Rick's own personal life. Each character in the drama is based out of Sigmud Freud's ID, EGO, and SUPEREGO persona.

I then classified The Governor as an ID character -  Our impulses. An urge, impulse, or desire so strong that it just had to be satisfied. The id contains all of our most basic animal and primitive impulses that demand satisfaction.

As far as I can tell, there is no other character comparable to The Governor, yet. A drama simply just cannot continue on without a villain. Not unless, of course, a governess is in the making. Wanna take a guess? Did I hear a Carol?

These sneaking suspicions are purely just for fun. That is the beauty of it all. Something to think about while we wait for the upcoming episodes to flood our tv sets as zombies continue to devour our senses in 2014.

Posted by Chiqui Raveloski at 12:29 AM