THERE'S A NEW SHERIFF IN TOWN 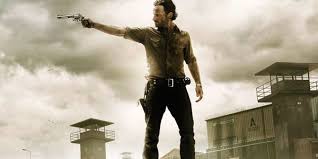 The season 4 finale of The Walking Dead demonstrated how savagery and survival became a strong partnership when faced with adversities in a zombie apocalyptic world.

Rick in an attempt to save Carl from a horrific rape act from a monster suddenly became barbaric as he turned into a "biter" in order to maneuver himself free from an ambush. Rick went right into the "jugular" to overcome the odds that were rather slim to none. He went on to continue with his rampage as he slaughtered the would be rapist to save his son Carl from more plundering.

Yet, one thing that I though was odd was how Carl acted towards his attacker. I understand that it would be traumatic and one's response would be to be totally helpless. But, Carl has been portrayed as a much stronger and will powered individual than what I saw during his attack.

I remembered when 3 zombies were stacked on top of him and he adroitly maneuvered his way out of what would have been a Carl Cuban Sandwich!

I probably would have freaked out and say, "Fine, you win"!

As uncivilized as it might have looked and sounded based on what we saw on the finale, Rick's temporary primeval actions truly showed how he is adapting to the post zombie apocalyptic world. Charles Darwin's adaptation and survival theory was clearly written all over this scenario.

In the same manner, we also saw a tender and warm side of Rick as he claimed the spirit of brotherhood to his long lost friend Daryl.

The nurturing and compassionate trend continued on as we saw "prison" scenes with Herschel serving as a guide for the upcoming Terminus event. My blog post  The Walking Dead...According To Freud  identified  Herschel as  the "superego" component of the show. The superego is the aspect of personality that holds all of our internalized moral standards and ideals.

When Herschel said, "Ever since I gave Glenn my watch, I can't seem to keep track of time anymore", Rick''s attention focused right into the pocket watch that one of the Terminus' inhabitant's was wearing. This suddenly sparked the start of what would be a trap at Terminus.

We knew that there might be an entrapment involved when we saw Rick explaining to Carl how a rabbit trap works when they were walking in the woods. It all made sense when we saw the snipers at Terminus successfully guide the runners by carefully firing a pathway right where they wanted them and leading into the train bus.

But, did anyone hear of  people crying for help while Rick and the rest were running inside the compound ? The sound came for a brief moment but surely noticeable. I cannot help but think that one of the voices might have been of Beth.

Another possibility could be Carol or Tyrese even. But, I have to say that Carol would be a more watchful individual than that of Rick. I just can't picture her succumbing to enter Terminus right away. She will be the one to survey the area, plan accordingly, and evaluate the pros and cons for days.

I thought for a moment that Rick would do the same thing. I was surprised to see them enter Terminus from the back end and surprised the weirdos with their arrival after a quick appraisal of the region.

I cannot help but think of Rick as a squirrel or a rabbit hiding their food under ground while he buried his armory in a wooded area. It was so symbolic since they were surely treated like rodents when they were surrounded with gun fire stringing them along to the train bus.

Once inside the "container",  Rick, Archer, Samurai, and the kid heard Glenn's voice.. "You;re here" was all Rick can say as Maggie, Bob, Sasha, Tara, Abraham, Eugene and Rosita appeared from the opposite side of the bus.

A sudden shift to the prison scene showed the gardener Rick instructing Carl how to properly use a shovel. Yet again another symbolic gesture was made when Rick placed Carl's hat onto Beth's blond haired head saying "There's a new sheriff in town". And together with Herschel uttering the words, "It should always be like this", the act served as a reminder for Rick that uh-huh, "They will feel very stupid when they find out, they're screwing with the wrong people"!

Oh yes, The Rickonator is back

With his new found canine choppers , I'm sure he wouldn't put this talent to waste. You could only imagine what he would be capable of trying to lead his conglomerate out of this flesh eating compound called Terminus.

Posted by Chiqui Raveloski at 3:22 PM